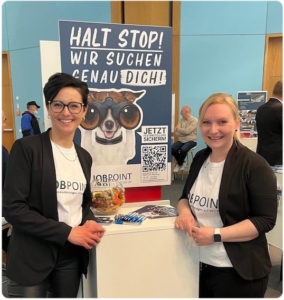 After a long wait, due to the Corona Pandemic, a job fair of the Wit­ten­berg Employ­ment Agency took place again on 22.04.2022. We have not let us take and were of course there. Intensive contacts could be made again. Numerous companies presented them­sel­ves on this day, adver­ti­sed for workers and laid the foun­da­ti­on for intensive coope­ra­ti­on. Also many app­li­cants used this day to inform them­sel­ves about the numerous regional job offers. We would like to express our gratitude for this positive response, the numerous app­li­ca­ti­ons, but also the personal inter­ac­tion of a wide variety of companies. Of course, we would also like to thank the orga­ni­zers and ask them to integrate this job fair as a regular, fixed component. 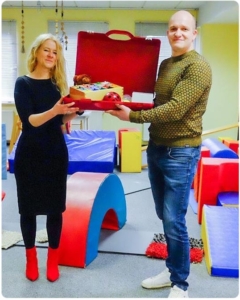 After a visit to the support center, owner Matthias Müller and his col­leagues decided that they would like to support the work of the support center. Their donation of 1,500 euros fell into open arms, so to speak, with Katja Rittel and her team. “We currently have more regis­tra­ti­ons than ever before and cannot keep up with the initial diagnosis of the children,” reports facility manager Rittel.

Now things are moving faster. A second WET testing kit is now available for dia­gnostic purposes. The Vienna Deve­lo­p­ment Test (WET) is a method for dia­gno­sing the general deve­lo­p­men­tal status of children between the ages of three and six. In a playful manner, all relevant func­tio­n­al areas such as speech, motor and fine motor skills, memory, language com­pre­hen­si­on and visual per­cep­ti­on are tested. The eva­lua­ti­on of the test then forms the basis for the­ra­peu­tic measures. “This is a very good test procedure that we enjoy working with,” explains Rittel. “That’s why we’re thrilled that we can now help more children with the second case.”